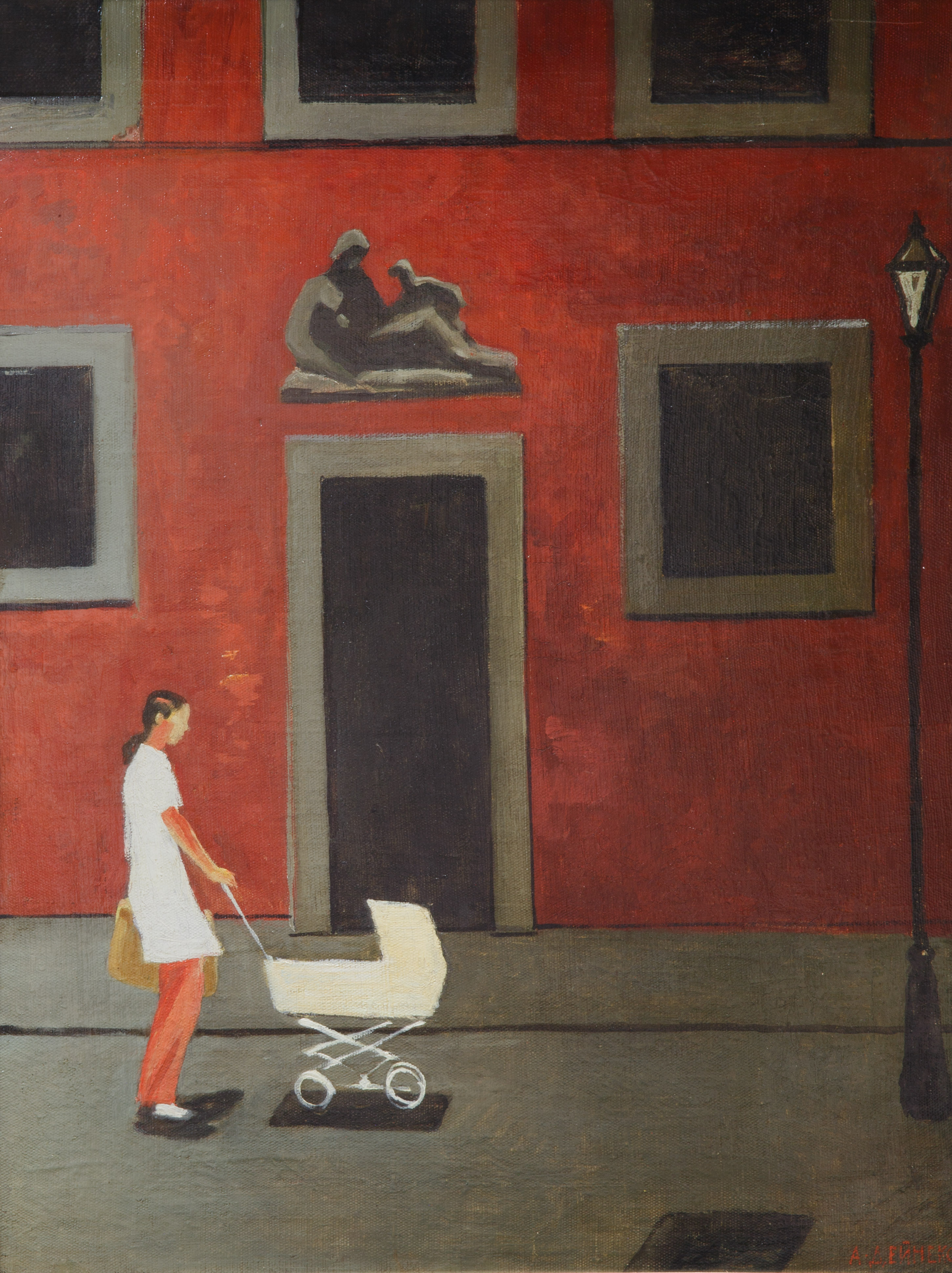 Woman with Stroller, Italy, circa 1935

LOT NOTES
By the 1930s Aleksandr Deineka is hailed as a foremost Soviet modernist both at home and abroad, and 1934-35 proved especially fruitful years for international exposure. In 1934, Deineka represents the USSR at the 19th Venice Biennale (where his painting is purchased by the Italian Ministry of Education); features in group exhibitions of Soviet graphic art (Copenhagen) and posters (first in London, then across Italy and France); and the 33rd Carnegie International exhibition at the Carnegie Institute in Pittsburgh, where he is awarded Honorable Mention.

In the fall of 1934, Deineka is invited to showcase his works and serve on the jury panel for an upcoming exhibition of Soviet art in Philadelphia, organized by VOKS (All-Union Society for Cultural Relations with Foreign Countries), the Pennsylvania Museum of Art and the American-Russian Institute of Philadelphia. Moreover, VOKS chose Deineka to personally represent the USSR at the exhibition. (A rare opportunity indeed: with the assassination of Sergei Kirov on December 1, which heralded the beginning of the “Great Purge”, fewer and fewer Soviet citizens were allowed abroad. Deineka’s own foreign passport was signed by Genrikh Yagoda, who would be demoted from the NKVD in 1936 and executed two years later). The Art of Soviet Russia ran at the Philadelphia Museum of Art from December 15, 1934 - January 21, 1935 and travelled extensively through 1936 to some two dozen venues across the U.S. and Canada. Aside from Deineka, the show featured works by contemporaries Kuzma Petrov-Vodkin, Aleksandr Shevchenko, Yuri Pimenov and Martiros Saryan.

Following his trip to the U.S., Deineka journeys to Europe: first Cherbourg and Paris, then Rome, which he immediately falls in love with. In a letter addressed to his wife Serafima Lycheva, dated April 24, 1935, he writes: Ah, [Serafima], what a city - Roma! Go in any direction and you’ll find dozens of delightful things —some little fountain, street, square. Everywhere, a variety of old marble, various gods, wonderful architecture. The painter’s fascination with classical forms is at the heart of this work, striking a delicate balance between the clean lines of the façade, also echoed by the shape of the manhole and the shadow cast by the baby carriage, and the modelled sculptural bas-relief above the door frame. (A similar building is seen in his 1935 Rome. Alleyway, held at the Kursk State Picture Gallery; click here to view online.) The dusky color palette of brick red, terracotta orange, pale yellow, cream and grey completes the sense of austere and bold beauty.

CONDITION
Observed in frame, the painting appears in good condition. The board is slightly convex. Overall age-appropriate very fine and stable craquelure. A small scratch to the upper right corner, measuring 5 cm (2 in.) in length. Rubbing to the left edge of the canvas due to the frame. Inspection under UV shows around 5% of retouching, most notably to the upper right corner, left edge with scattered retouching.
framed dimensions: 81 x 65 cm (31 7/8 x 25 5/8 in.)

N.B. All lots are sold in as-is condition at the time of sale. Please note that any condition statement regarding works of art is given as a courtesy to our clients in order to assist them in assessing the condition. The report is a genuine opinion held by Shapiro Auctions and should not be treated as a statement of fact. The absence of a condition report or a photograph does not preclude the absence of defects or restoration, nor does a reference to particular defects imply the absence of any others. Shapiro Auctions, LLC., including its consultants and agents, shall have no responsibility for any error or omission.

For more information on our auctions and how to bid, please contact us by email or phone. Our specialists are standing by to answer your questions and assist in choosing a bidding method that suits your needs.