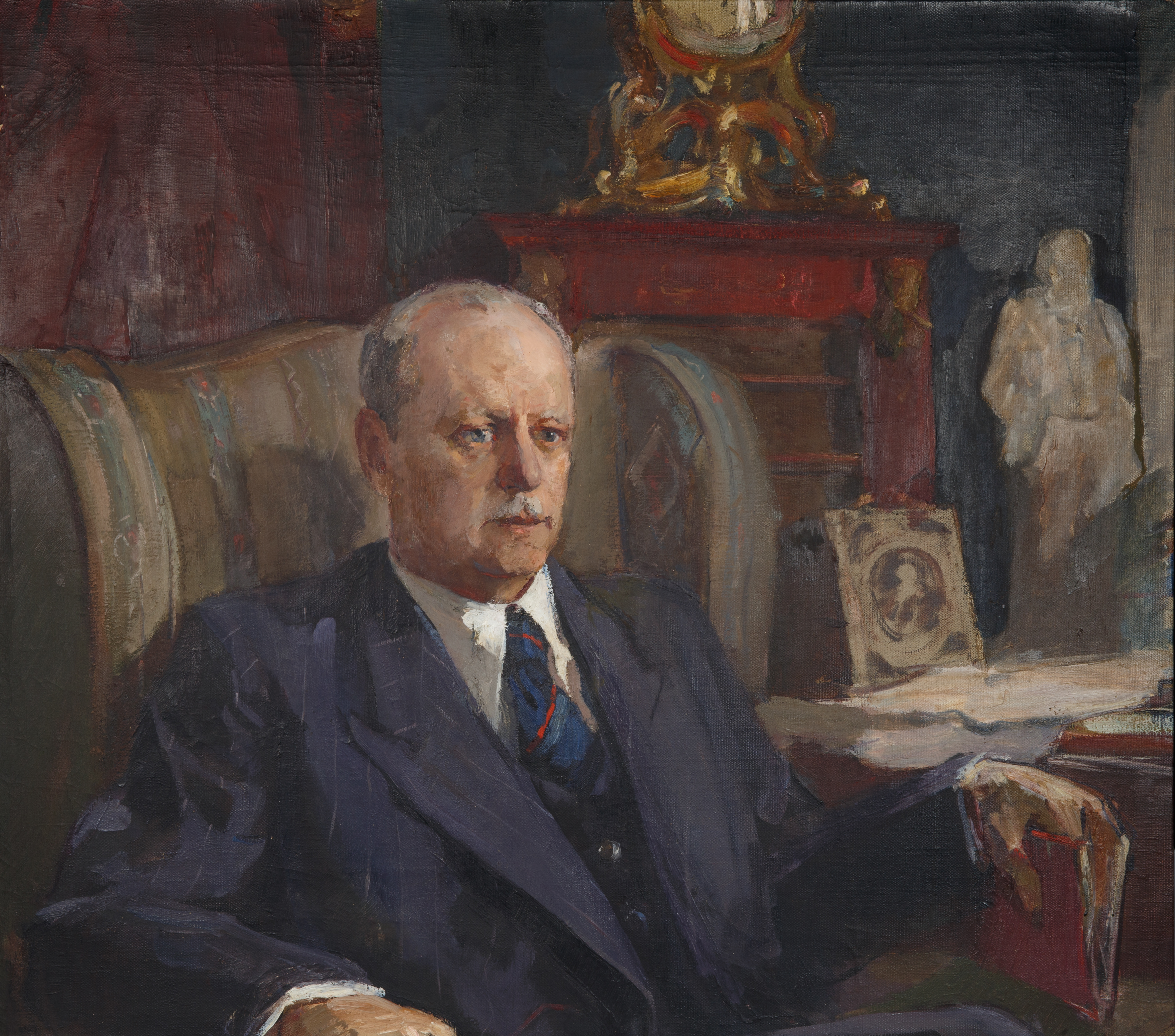 PROVENANCE
Collection of Sergei Rinkevich
Thence by descent in the family

When Samokhvalov produced this work in the early 1950s, he was renowned for monumental Socialist Realist history paintings, as well as intimate portraits in interior settings, including the present and Girl in an Interior (sold for $131,000, including buyer's premium, at Shapiro Auctions, December 10, 2016, lot 7). The sitter, Professor Sergei Rinkevich, was an eminent electrical engineer and professor, best known as the purveyor of the electrical drive in the USSR. Dr. Rinkevich marshalled the founding of the world's first university department dedicated to the improvement of the drive, which, under his directorship in the 1920s and 30s, launched the rapid electrification of the Soviet heavy industry and navy.

According to the letter provided by the sitter's grandson, Igor Sergeevich Rinkevich, who witnessed the making of the work, Samokhvalov painted the image over several sessions in the family's Leningrad apartment in the early 1950s. (See ref. 1 for a photograph of Igor Rinkevich together with the work). Capturing the likeness of one of the nation's distinguished scientists, Samokhvalov shows Dr. Rinkevich deep in thought, his fingers bookmarking a red volume -- a pose reminiscent of Renaissance and Baroque portraits of scholars, such as Bronzino's Portrait of a Young Man with a Book in the collection of the Metropolitan Museum. With characteristic economy of brushwork, Samokhvalov pictures his subject attentively and at a considerable scale, demonstrating his hand as a leading Soviet portraitist.

Alexander Samokhvalov, one of the foremost representatives of the Leningrad school of painting, began his artistic career in 1914 at the Higher Art School at the Imperial Academy of Arts, where he studied under Kuzma Petrov-Vodkin. Unlike many of his peers at the academy and the Mir iskusstva circle, such as Eugene Lanceray, Anna Ostroumova-Lebedeva, or Alexander Osmerkin, in the late 1920s Samokhvalov enthusiastically embraced the development of Socialist Realism for which he is remembered. As in his most recognizable work — Girl in a Football Shirt, awarded the gold medal at the International Art Fair in Paris (which also exhibited Pablo Picasso's Guernica) — his paintings from the 1930s often showcase the first generation of Soviet women as the face of modernity and strength.

N.B. All lots are sold in as-is condition at the time of sale. Please note that any condition statement regarding works of art is given as a courtesy to our clients in order to assist them in assessing the condition. The report is a genuine opinion held by Shapiro Auctions and should not be treated as a statement of fact. The absence of a condition report or a photograph does not preclude the absence of defects or restoration, nor does a reference to particular defects imply the absence of any others. Shapiro Auctions, LLC., including its consultants and agents, shall have no responsibility for any error or omission.

For more information on our auctions and how to bid, please contact us by email or phone. Our specialists are standing by to answer your questions and assist in choosing a bidding method that suits your needs.